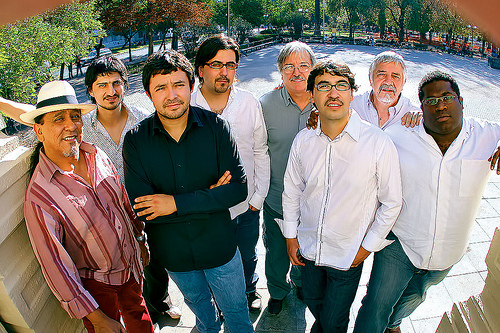 Considered the ambassadors of South American music, Chile’s Inti-Illimani have endured political upheaval, exile, and the passage of time

A veritable institution in their homeland, Chilean music ensemble Inti-Illimani will perform the first installment of the U.S. tour “La Maquina del Tiempo” (Time Machine) 8 p.m. Wednesday, Oct. 3 in the Williams Center for the Arts at Lafayette College.

The concert is preceded by a 7 p.m. conversation with members of Inti-Illimani about their four decades of music, of which 15 were spent in exile in Italy during the regime of Augusto Pinochet.

Now in their 45th year, the group’s Latin-infused music is a whirlwind of Andean folk tunes, tangos from Argentina, Brazilian sambas and love songs from Mexico performed on more than 30 instruments. The Los Angeles Times writes: “Few Latin American acts can rival this Chilean group in terms of the sheer beauty of sound. Much like a Zen affirmation, Inti-Illimani’s music floats within your soul, filling it with calmness and hope.”

The group was started in 1967 by students at Santiago’s Technical University who began performing traditional folk music, something few did back then. When Pinochet came to power in 1973 during a military coup, the group was forced into exile for using its music to express the need for social change. They continued to record in Italy and tour and their outspoken opposition to the Pinochet regime earned them a powerful reputation around the globe as unofficial ambassadors of Chilean music. In addition to performing with a number of famous political figures like Pete Seeger and Mikis Theodorakis, they were included on the famous 1988 Amnesty International Tour, along with Sting, Peter Gabriel, and Bruce Springsteen. They returned to their homeland in 1988.

The tour is made possible by a Southern Exposure Grant through the Mid Atlantic Arts Foundation with funding from the National Endowment for the Arts and the Robert Sterling Clark Foundation.