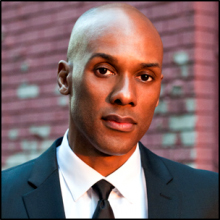 “For Colored Boys Who Have Considered Suicide: When the Rainbow is Still Not Enough” is the title of his lecture, which is free and open to the public.

An aide to former President Bill Clinton, Boykin was once the highest-ranking openly gay person in the White House. He is a graduate of Dartmouth and Harvard, where he went to law school with President Barack Obama. Currently Boykin is the editor of The Daily Voice, an online newspaper, co-host of the BET talk show “My Two Cents” and makes regular appearances on CNBC as a political commentator.

He is also the author of several popular books, including the New York Times best-seller Beyond the Down Low: Sex, Lies and Denial in Black America. His newest book is For Colored Boys Who Have Considered Suicide When the Rainbow is Still Not Enough: Coming of Age, Coming Out and Coming Home. It responds to the crisis of youth development and suicide in the black community, specifically among young gay men of color.

He was a star on the 2004 Showtime television series American Candidate and has since appeared on numerous national media programs, including “Anderson Cooper 360,” “The O’Reilly Factor,” “The Tyra Banks Show,” “The Montel Williams Show,” “Judge Hatchett,” and “The Tom Joyner Morning Show.”

A founder and first board president of the National Black Justice Coalition, Boykin delivered a landmark speech to 200,000 people at the Millennium March on Washington and gave a stirring speech about the AIDS epidemic in front of 40,000 people in Chicago’s Soldier Field in July 2006.

There will be a book signing after the lecture.