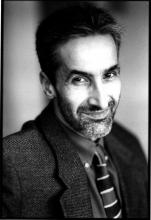 A related lecture by Freedman, “Have a Little Faith: Why the News Media Gets Religion Wrong,” precedes this event at 4:10 p.m. in Kirby Hall of Civil Rights, room 104. A reception will be held after the talk in the lobby.

The talks are free and open to public.

A leading authority on the American-Jewish experience, Freedman brings with him years of scholarship on topics ranging from religion to education. He writes the “On Religion” column for The New York Times, and is a tenured professor at New York’s Columbia University Graduate School of Journalism. He is the author of six acclaimed books including The Inheritance: How Three Families and America Moved from Roosevelt to Reagan and Beyond and Jew vs. Jew: The Struggle for the Soul of American Jewry.

Freedman is currently at work on his seventh book, The Big Game: Football and Freedom in the Civil Rights South.

He is a board member of the Institute for American Values and the Jewish Book Council. He has spoken at the Smithsonian Institution, Yale University, and UCLA, among other venues, and has appeared on National Public Radio, CNN, and the News Hour with Jim Lehrer.

His lecture is sponsored by Hillel, the departments and offices of religious and spiritual life, religious studies, English, and the film and media studies program.