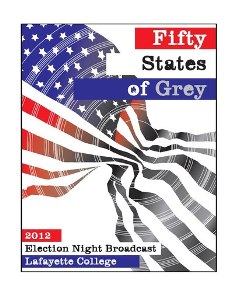 Student-run show will be aired to 2.6 million households

Lafayette is partnering with WLVT Channel 39 to produce a live, student-run election night broadcast from the College’s Farinon Center.

The PBS station will air the live show to its 2.6 million viewers in northeastern United States on Tuesday, Nov. 6 from 9-11 p.m.

More than 100 students from a variety of majors are working on the show, called “Fifty States of Grey,” which will feature up-to-the-minute information on the races for President, Senate, and House of Representatives.

“This offers a unique opportunity for Lafayette students. The broadcast team is working together to address hundreds of details and issues necessary to produce a major broadcast. This is the type of practical experience that requires students to become creative problem solvers,” says organizer Mark Crain, Simon Professor of Political Economy and chair of policy studies.

Lafayette students produced a presidential election broadcast in 2008, but this is the first time the College is working with PBS 39. Crain said involvement with the station “will add a level of professionalism and quality to the broadcast.”

Station Manager Amy Burkett says the broadcast represents a milestone for PBS 39, which recently relocated to a new, state-of-the-art facility at SteelStacks in South Bethlehem.

“We’ve never done an election night broadcast before,” says Burkett, who also hosts the show ‘Tempo InDepth.’ “All of the students’ hard work will be showcased to the public and the broadcast will provide a wonderful service to our viewers. We’re excited to partner with Lafayette.”

In addition, PBS 39 is working with students on writing scripts, shooting videos, editing; “the whole broadcast component,” says Burkett, who recently consulted with Moravian College students on a documentary that won a Mid-Atlantic Emmy Award.