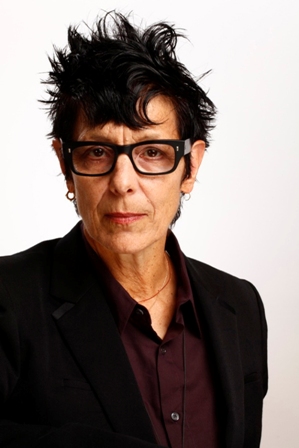 Brooklyn-based choreographer Elizabeth Streb will present dance as a connector to physics, mechanics and structural design on a tour of local colleges on Wednesday, April 30 and Thursday, May 1, as part of Lafayette’s “Choreographers on Campus” grant from The Andrew W. Mellon Foundation.

Streb will lead discussions about her experimental choreography at Lafayette College at noon April 30 in the Williams Center for the Arts room 108. At 2 p.m., she will lead a class at Muhlenberg College in Moyer 209 with permission of campus host Karen Dearborn. Her 8 p.m. lecture at Lehigh University in the Chandler-Ullman Lab Building hosted by Tony Viscardi is free and open to the public. On Thursday, May 1, she will teach a master class at DeSales University in the Brisson Dance Studio with permission of campus host Tim Cowart.

Once called the “Evel Knievel of Dance” for her extreme approach of testing the boundaries of physics and movement, Streb is interested in the effects of gravity, math and physics on her work. Her choreography, which she calls “POPACTION,” intertwines the disciplines of dance, athletics, boxing, rodeo, the circus, and Hollywood stunt-work.

“I think my original belief and desire is to see a human being fly,” says Streb, the director of Streb Extreme Action Company and founder of the SLAM—the Streb Lab for Action Mechanics. When the lab was founded in 2003, SLAM created a new outlet for the community where people could come and watch rehearsals and even participate and learn to fly.

“At this point in my career, my vision for SLAM is as a beta-test for a new cultural paradigm,” Streb says. “SLAM is an open-access venue that models a new kind of artist-driven community institution.”

“Choreographers on Campus” began Nov. 1 and extends through Oct. 31, 2016. The Mellon grant encompasses short- and long-term artist residencies, classes, workshops, performances, and commissions of new work, and one of its aims is to explore how dance’s creative powers can be infused across a liberal arts curriculum.

“Elizabeth Streb’s visit will provide significant opportunities for cross-disciplinary connections,” says Wendy Hill, provost and dean of the faculty. “Her Streb Lab for Action Mechanics tests scientific principles on the body in a way that rivets your attention.”

Streb is a recipient of the John D. and Catherine T. MacArthur Foundation ‘Genius’ Award (1997), a Doris Duke Artist Award (2013), and a member of the New York City Mayor’s Cultural Affairs Advisory Commission. She holds a Master of Arts in Humanities and Social Thought from New York University, a B.S. in Modern Dance from SUNY Brockport and two honorary doctorates (SUNY Brockport and Rhode Island College). In 2010, Feminist Press published her book, STREB: How to Become an Extreme Action Hero.

Streb is the subject of the 2014 documentary Born to Fly and has been featured in PopAction by Michael Blackwood, PBS’s “In The Life” and “Great Performances.” Her work has been seen on “The David Letterman Show,” CBS’s “Sunday Morning,” CNN’s “Showbiz Today,” “ABC Nightly News with Peter Jennings,” Nickelodeon, NBC’s “Weekend Today,” MTV, Channel 11’s “News Hour,” NY1 News, and on “Larry King Live.”