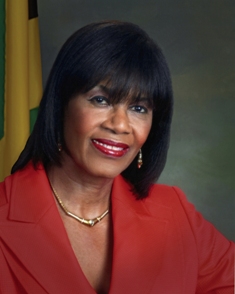 Lafayette College will hold its 179th Commencement at 2:30 p.m. on Saturday, May 24 outside on the campus Quad. The academic procession will begin at 2:15 p.m.  In case of rain, one or both ceremonies may be held in Kirby Sports Center.

The prime minister of Jamaica, The Most Honorable Portia Simpson Miller, is the Commencement speaker. She will be awarded an honorary Doctor of Public Service degree.

Lafayette will award 614 degrees to 590 graduates.

Brad Bormann ’14 (Flemington, N.J.) is the recipient of the George Wharton Pepper Prize, awarded annually to the senior “who most nearly represents the Lafayette ideal.”

A biology major with a minor in English, Bormann was chosen through a vote of the student body and faculty, and will speak at Commencement.

In addition to Simpson Miller, Lafayette is awarding honorary degrees to the following:

– Harry L. Ettlinger, a member of “The Monuments Men” of World War II, will be awarded an honorary Doctor of Humanities degree.

– Roger Ross Williams, Academy Award-winning producer and director of documentary films, will be awarded an honorary Doctor of Arts degree.