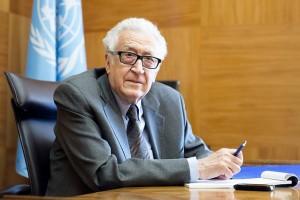 UPDATE 3/17: Ambassador Lakhdar Brahimi, former UN Under Secretary-General and Special Advisor to the UN Secretary-General and Practitioner-in-Residence of the Einaudi Center for International Studies at Cornell, will present “Syria: A National, Regional and International Tragedy” at 7 p.m. Wednesday, March 30 in Oechsle Hall auditorium 224 at Lafayette College. The talk, originally scheduled for March 11, is free and open to the public. It is sponsored by funds for the Robert ’69 and Margaret Pastor Lecture in International Affairs.

An Algerian diplomat, Ambassador Brahimi served as the United Nations and Arab League Special Envoy to Syria from 2012 to 2014. He was the Minister of Foreign Affairs of Algeria from 1991 to 1993. He has led a distinguished career negotiating peace and resolving conflicts between and within nations including efforts in Lebanon, South Africa, Haiti, Afghanistan, and Iraq.

Ambassador Brahimi is a member of The Elders, an independent group of global leaders working together for global peace and human rights. He is also a member of the Commission on Legal Empowerment of the Poor, a global initiative that focuses on the link between exclusion, poverty and law. He is also a member of the Global Leadership Foundation, an organization which works to promote good governance around the world. He is a distinguished senior fellow at the Centre for the Study of Global Governance at the London School of Economics and Political Science, and a governing board member of the Stockholm International Peace Research Institute.

The inaugural Robert ’69 and Margaret Pastor Lecture in International Affairs was delivered at Lafayette in 2013 by U.S. President Jimmy Carter.