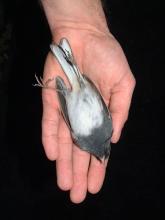 Biologist, activist, and artist Brandon Ballengée will give an illustrated presentation, “The Fading Poetry of Feathered Dinosaurs,” 7:30 p.m. Monday, April 4 at the Williams Center for the Arts, 317 Hamilton St., room 108 at Lafayette College. It is free and open to the public. A book signing follows.

Ballengée explores the boundaries between art and science, creating works about “bio-indicator” species, such as amphibians, fish, and birds. His artwork is transdisciplinary, inspired from ecological field and laboratory research.

Since the beginning of art, avian species have captured the human imagination with visions of flight and aspirations of freedom. Such birds even inspired Charles Darwin and influenced his ideas on species changing over time. Yet, what does it mean when an individual bird’s gift of flight is taken away because of chemicals impacting development? Or an ancient avian species (feathered dinosaur) disappears completely within our lifetime?

His research on avian species and conservation is the subject of a new book From Scales to Feathers, co-published by the Williams Center Gallery at Lafayette College, the Shrewsbury Museum and Gallery (UK), and the Museum Het Domaine (Netherlands).

In addition, Ballengée’s exhibit of prints from the limited edition portfolio “A Habit of Deciding Influence: Pigeons from Charles Darwin’s Breeding Experiments,” is on display in the Williams Center Lobby through April 9. The portfolio was printed at the Williams Visual Arts Building in 2010 by Lew Minter, now retired Director of Art Department Media Lab and Sydney Peyser ’10.

On Tuesday, April 5 Ballengée, currently a postdoctoral researcher in the Biological Sciences Department at Louisiana State University, will give an illustrated presentation of his artworks and research on the impact caused by the 2010 oil spill — the largest industrial petrochemical accident in the history of the United States. The talk, titled “Crude Life: An Art and Science Investigation of Gulf of Mexico Biodiversity after the Spill,” will be given at 12:15 p.m. in the Williams Center, room 108 at Lafayette. It is free and open to the public.

The Gulf of Mexico is among the most important and biologically diverse marine environments in the world and Gulf seafood is an important source of food for people in North America and in Europe. The Deepwater Horizon (DWH) spill could not have occurred at a worse place, from an ecological and economic standpoint.

A recent United States Congressional Report estimates that, after cleanup efforts, almost half the oil (over 100 million gallons) remains in the Gulf and the long-term magnitude of the spill is not well understood. Because the oil spill occurred in the deep sea, its impact on the biota has been difficult to access.

Image: Collapse, Brandon Ballengée, 2010-12, mixed media installation. Collapse consisted of more than five hundred large specimen jars with preserved fish, aquatic organisms, and Deep Water Horizon contaminates stacked into a pyramid. It was meant to recall the fragile intertrophic relationships between Gulf species and the way that the spill is changing this.

The events are sponsored by Lafayette Art Galleries and the Department of Art. For more information, contact: Michiko Okaya, director of art galleries, 610-330-5361, okayam@lafayette.edu.

About the Artist: Since 1996, a central investigation focus of Ballengée has been the occurrence of developmental deformities and population declines among amphibians and other ectothermic vertebrates. He is a postdoctoral researcher in the Biological Sciences Department at Louisiana State University,studying the impact on fishes from the 2010 Gulf of Mexico oil spill.

From 2009 through 2015 he conducted amphibian research as a Visiting Scientist at McGill University (Montréal, Canada). In 2011 he was awarded a conservation leadership fellowship from the National Audubon Society’s TogetherGreen Program (USA).

Ballengée’s art has been exhibited internationally and in the summer of 2013 the first career survey of his work debuted at the Château de Charamarande in Essonne (France), and travelled to the Museum Het Domein in Sittard (Netherlands) in 2014. A mid-career retrospective of his work will open this fall at the University of Wyoming Art Museum.

In honor of Charles Darwin’s 200th birthday and the 150th anniversary of the publication of On the Origin of Species, Lafayette College’s Williams Center Gallery and the Shrewsbury Museum, Shropshire, England, presented joint exhibitions of works by Brandon Ballengée in 2009-10.

He holds a Ph.D. from the University of Plymouth (England) in collaboration with the Hochschule für Gestaltung Zürich (Switzerland).