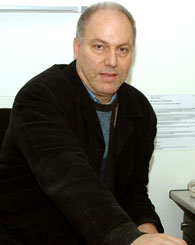 Prof. Habib C. Malik of Lebanese American University (LAU)-Beirut will present the 2016 Earl A. Pope Guest Lecture in World Christianity, “What Native Christians in the Middle East Continue to Face: Why it Matters for Both the Caring and the Unconcerned,” at 7:30 p.m. Tuesday, April 12 in Kirby Hall of Civil Rights, room 104, at Lafayette College. The talk is free and open to the public.

Malik, associate professor of history and cultural studies, has lectured and written widely in both English and Arabic on topics that include the history of ideas, Søren Kierkegaard, existentialism, human rights, the plight of native Middle Eastern Christian communities, Lebanon, democracy in the Arab world, interreligious dialogue, America and the Middle East, and Christian faith in a secular world.

His books include, among others: Between Damascus and Jerusalem: Lebanon and Middle East Peace, two editions (Washington, D.C.: Washington Institute for Near East Policy, 1997 and 2000); an edited volume, The Challenge of Human Rights: Charles Malik and the Universal Declaration (London: Centre for Lebanese Studies at Oxford, 2001); and a short monograph Islamism and the Future of the Christians of the Middle East (2010).

The inaugural Earl Pope Lecture was delivered at Lafayette in 2013 by one of the world’s foremost experts on the growth and spread of Christianity in the 20th and 21st centuries—Lamin Sanneh, D. Willis James Professor of Missions and World Christianity and professor of history, Yale University Divinity School.