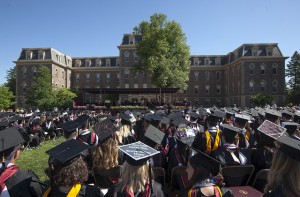 Lafayette College will hold its 181st Commencement at 2:30 p.m. on Saturday, May 21 outside on the campus Quad. The academic procession will begin at 2:15 p.m. In case of rain, one or both ceremonies may be held in Kirby Sports Center.

Lafayette will award 591 degrees to 568 graduates.

Commencement will feature an address by William D. Adams, chairman of the National Endowment for the Humanities, as well as farewell remarks from President Alison Byerly and Pepper Prize Winner Guilherme Ferreira de Avila ’16.

Read more about Lafayette’s Commencement, May 21.

Adams will be awarded an honorary Doctor of Humane Letters. He served as president of Colby College in Waterville, Maine, from 2000 until his retirement in 2014. He is a committed advocate of liberal arts education with a long history of leadership in higher education and the humanities. As senior president of the prestigious New England Small College Athletic Conference, Adams has been at the center of the national conversation about the cost and value of liberal arts education.

Read more about the honorands.

Guilherme Ferreira de Avila ’16 of Araxa, Brazil is the recipient of the George Wharton Pepper Prize, awarded annually to the senior “who most nearly represents the Lafayette ideal.” An economics major, he was chosen through a vote of the student body and faculty, and will speak at Commencement. Read more about Ferreira de Avila.

– L. Anderson Daub, a respected Lehigh Valley humanitarian, senior partner of Brown-Daub Automobile Dealerships, and committed public servant. Under his leadership, the family business has helped support Lehigh Valley nonprofits, including the United Way, Boys and Girls Club of Easton, and Northampton Historical and Genealogical Society. In 2011, thanks to Brown-Daub’s support, the State Theatre in Easton founded a gallery that exhibits works of local artists.

Daub will be awarded an honorary Doctor of Public Service degree.

– Roger Newton ’72, a pioneer in the cutting-edge field of biotechnology research. He is founder of Esperion Therapeutics and co-developer of Lipitor, a drug that lowers cholesterol levels. Lipitor is one product development in Newton’s 30-year research career. An adjunct associate professor of pharmacology at University of Michigan Medical School, he also is a member of the national advisory boards of University of Michigan Cardiovascular Center and University of Michigan Life Sciences Institute.

Newton will be awarded an honorary Doctor of Science degree.

– Marciene Mattleman, a distinguished advocate for literacy and public education, serves as founder and on the board of directors of ASAP/After School Activities Partnerships, which develops high-quality after-school activities and resources to empower youth and strengthen communities. She also serves on the Mayor’s Commission on Literacy in Philadelphia. She has founded and headed four nonprofit organizations, including Philadelphia Reads and Philadelphia Futures, the latter of which has been replicated in 18 other locations and was honored by President Bill Clinton for providing tools and resources to low-income, first-generation-to-college students. In 1995, she was appointed by the president to the advisory board of the National Institute for Literacy.

Mattleman will be awarded an honorary Doctor of Public Service Degree.

The ceremony will be streamed live in Colton Chapel and on www.lafayette.edu, the Lafayette homepage, which also will have post-event coverage of Commencement including videos, photo galleries, and an article. Also, follow the ceremony at #LafGrad on Facebook, Instagram, and Twitter.