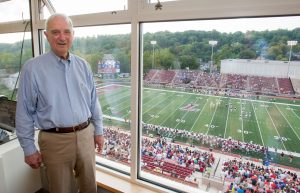 The scholarship fund is part of Lafayette’s permanent endowment. Gano has made a provision in his will to provide a gift upon his passing that will enable the fund to generate about $50,000 per year, in perpetuity, for need-based financial aid for Nazareth grads attending Lafayette.

Gano graduated from Nazareth in 1953 and from Lafayette in 1957. In recognition of his commitment to helping future students, Lafayette inducted him and his late wife, Jacquelynne Hartman Gano, into the College’s Société d’Honneur in a special ceremony Sept. 10. Membership in the society honors exceptional lifetime generosity to Lafayette on the part of alumni, parents, and friends.

For 62 years, Bill and Jackie Gano, who also graduated from Nazareth, were more than partners in life. They were partners in service. Their “journey to the American dream” began with a scholarship that enabled Bill Gano to attend Lafayette, where he earned an economics degree. He went on to complete Bethlehem Steel’s prestigious executive training program, called the loop course, and earn an MBA at Loyola University. He also completed executive education programs at Harvard University and Duke University.

During his 35-year career at Bethlehem Steel, Gano was promoted to senior management, success born of his understanding of his products and his customers. In 1991, he was named vice president of the Charter Steel Division of Charter Manufacturing. Gano retired from Charter Manufacturing as president a decade later.

While raising three children, Jackie Gano earned bachelor’s and master’s degrees in education at Towson University. She taught elementary students in Maryland for 19 years, declining a promotion to assistant principal because of her passion for working one-on-one with students. She died in April 2016.

The Ganos also volunteered for numerous community organizations, including United Way of Central Maryland and the YMCA and YWCA.