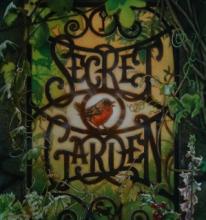 Based on Frances Hodgson Burnett’s beloved 1911 classic novel, The Secret Garden blossoms anew in this enchanting musical by Pulitzer Prize-winner Marsha Norman and Lucy Simon. Young Mary Lennox, orphaned and sent to live with relatives whom she has never met, brings new life to a neglected garden, as well as to her sickly cousin and uncle, in this Broadway hit.

Lafayette’s production is directed and choreographed by Professor Mary Jo Lodge with musical direction by Tom DiGiovanni ’96. There are 22 cast members, including Lafayette students and five community members from Easton or greater Lehigh Valley. Mary Lennox is played by Sofia Pite Eckman and Gabrielle Vecciarelli, both sixth-graders at Moravian Academy in Bethlehem. Colin is played by Miles DeMaria and Ian Higgins, both sixth-graders. Miles is a student at the Arts Academy Charter Middle School and Ian Higgins hails from Washington, NJ. Ben, the gardener, is played by Easton resident Frank Ruscitti.

“We’re so pleased to bring this beautiful adaptation of The Secret Garden, which is celebrating the 25th anniversary of its Broadway debut this year, to Lafayette,” says Theater Professor Mary Jo Lodge. “This is the first production in the brand new Weiss Theater on the now complete Williams Arts Campus. The Theater Department felt that The Secret Garden, which is the story of the rebirth of both a long abandoned garden and a fractured family, was a wonderful way to welcome people to our renovated and reclaimed spaces at the base of College Hill, which were also once abandoned and now, too, are reborn.

“One of the most exciting aspects of this production of The Secret Garden is that it has allowed us to bring our vision of these new spaces as a gateway to the community in Easton and in the Greater Lehigh Valley to fruition. We’ve been so pleased to welcome community members into our production, including the four children who share the demanding roles of Mary and Colin, as well as Easton local Frank Ruscitti, who plays Ben, the gardener. In addition, we’ve been able to include professional Easton-based flute player Pamela Taylor, whose participation was made possible with the generous support of the Mellon Foundation, in our production.

Finally, we were extremely honored to welcome librettist Ms. Norman, who was awarded the Tony Award for Best Book of a Musical for The Secret Garden, as well as the Pulitzer Prize for her earlier play Night Mother, to campus to discuss the show with the cast and crew, and to deliver the inaugural Karyn & Paul (’88) Staubi Lecture in Theater to our Lafayette students, to our students and theater colleagues from our neighboring LVAIC schools and to the community at large on October 13th.” 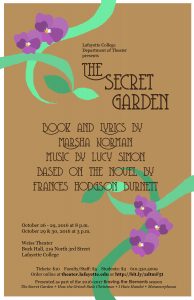