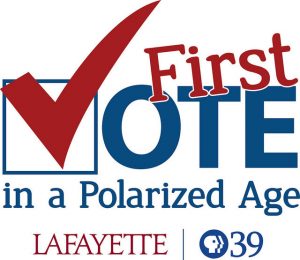 A group of first-time voters from Lafayette College won’t just cast a ballot on Election Day. They’ll also broadcast live from campus as the results roll in, providing the latest information, analysis and commentary on this historic election night. The broadcast, First Vote in a Polarized Age, will air Tuesday, November 8 from 9 to 11 p.m. on PBS39/WLVT, the PBS affiliate in the Lehigh Valley. The coverage will reach a potential 6 million viewers in eastern PA and western NJ.

More than 120 students will contribute to the live production at Lafayette’s Farinon College Center. These include students enrolled in courses such as the policy studies leadership course, two first-year seminars on the media, a geology class on Geographic Information Systems, and a first year seminar on polling. Students from various majors have spent the semester analyzing and researching the presidential, Congressional, and state races, and have learned the elements that go into producing a live broadcast.

Laura McHugh, PBS39 executive producer, local programming, will participate in the broadcast, and has worked closely with the students as they write scripts, conduct interviews with local experts, and refine their on-air presence in preparation for a night of live coverage. “Our mission is to educate and engage the community,” McHugh said. “This experience doesn’t just involve college students in the election process. It also offers our viewers an important and unique point of view from our future leaders.”

The broadcast will also feature video essays. These short segments will cover politics and policy from the perspectives of first time voters, including a wide variety of interviews and perspectives.

One video essay looks at how campaigns are targeting voters based on their location and viewing habits using new technology, with expertise provided by government relations and “big data” expert Peter Jacoby, Lafayette class of ’81. Government & law major and Maryland native Karla Talley ’18 who worked on this video essay said voters don’t always realize that their actions in social media have an impact. “Political campaigns are using the things you ‘like’ on your Twitter and Facebook accounts….When you see an addressable ad on your Facebook timeline, you’re actually being targeted by campaigns.”

Another video essay will feature local business owners who say they’ll be deeply affected by the outcome of this election. “We realized that small businesses were at the center of a lot of discussions,” says Luis Espinal, a class of ’17 economics major from NYC. “My barber [in Easton] came to mind straight away because he’s a staple of the community so getting his voice as a small business owner made sense. If I could sum up their feelings in one word, it’s uncertainty. Business owners are concerned and uncertain about how proposed policy changes are going to impact them.”

Katherine (Kat) Stevens ’17, a policy studies and economics double-major from Colorado, and Frank Illuzzi ’18, a government and law major from New Jersey, will serve as co-hosts of the broadcast. Throughout the coverage, they’ll turn to a student-anchored political desk for updates on the latest returns, a social media desk, as well as The Bullpen, a moderated panel of students who will debate the issues and the outcomes as the results take shape.

“Working with the industry professionals at PBS39 is a wonderful opportunity for our students,” says Lafayette President Alison Byerly. “Because so many of our students are first time voters, doing a deep dive into the issues that will be affecting them – and us – through the video essays is important and engaging work. The live broadcast from our student center will be an exciting culmination for the entire campus.”

This partnership between Lafayette College and PBS39 began four years ago with coverage of the 2012 presidential race through the efforts of Professors Nicole Crain and Mark Crain, who are once again co-executive producers of the 2016 election broadcast. Since that first successful broadcast, both organizations worked to develop “Lafayette Lens on PBS39” where students produce a half-hour news magazine that explores issues of global importance from the perspectives of tomorrow’s leaders.