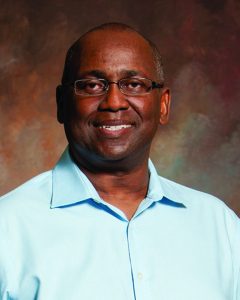 The lecture, which is free and open to the public, will focus on Shakespeare’s relevance for today when the thesis of a post-racial, colorblind America has been challenged by the brutal reality of multiple deaths of unarmed black civilians, forcing an inquiry into the postracial myth’s own premise as complicit with the politics of white privilege. Smith will use the example of Othello’s dying speech to initiate a dialogue about Shakespeare and race that sustains the vital connections among the world, the text, and the responsible reader.

His talk serves as both the Paul and June Schlueter Lecture in the Art and History of the Book as well as the Richard H. Jr. ’60 and Joan K. Sell Chair in the Humanities Inaugural Lecture.

A two-day symposium titled “Shakespeare, Race, and the Practical Humanities” April 19-20, 2017 will further address the practical humanities with a special focus on Shakespeare and race, as mediated through Shakespeare, the quintessential figure in the humanities. Featured scholars include Michael Witmore, director of the Folger Shakespeare Library; Ayanna Thompson, professor of English at George Washington University; Peter Erickson, visiting resident scholar at Northwestern University; and Kim F. Hall, Lucyle Hook Chair of English and professor of Africana Studies at Barnard College.

Smith is the inaugural recipient of Lafayette’s Richard H. Jr. ’60 and Joan K. Sell Chair in the Humanities. An award-winning teacher, he is a world-class Shakespearean and scholar of early modern literature and culture. The professorship was endowed by Robert E. Sell ’84 and his wife, Susan J. Sell, in honor of Bob’s parents.

The Schlueter Lecture Series was established in 2007 by Drs. Paul and June Schlueter in support of Skillman Library’s Special Collections. The donors intended that the lecture series cover a range of topics associated with the history, culture, production, conservation, and collection of books of all time periods and in all formats.