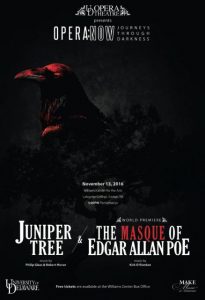 A new opera, The Masque of Edgar Allan Poe, premieres at Lafayette College Sunday, Nov. 13, thanks to composition and libretto by two award-winning faculty members.

A re-imagining of Edgar Allan Poe’s eerie short story, “The Masque of the Red Death”, this one-act opera by Kirk O’Riordan, assistant professor of music, with libretto by Lee Upton, professor of English, will be performed Sunday, 3 p.m. at Lafayette’s Williams Center for the Arts, 317 Hamilton St. O’Riordan will give a pre-performance talk at 2 p.m.

Masque will be paired with The Juniper Tree by Philip Glass and Robert Moran. Both operas will be fully staged, and performed with orchestra.

In the The Masque of Edgar Allan Poe, the character of the Red Death “is a personification of loneliness, drawn to the party by the two main characters—a professor who has studied Poe so fervently that he believes he is Poe, and a woman who is stuck there after being abandoned at the party by a friend,” O’Riordan says. “The action focuses on the developing relationship between Poe and the Woman, while the Red Death watches them, becomes angry and jealous and eventually unites the two in the afterlife.” 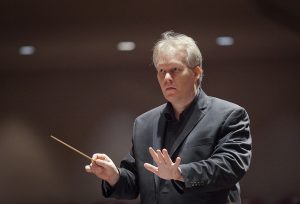 Kirk O’Riordan, assistant professor of music and director of bands at Lafayette

“The couple ultimately transcends death,” says Upton, noting that the opera is at first playful, then “moves into how life can be beyond the ordinary.”

Upton wrote the lyrics after O’Riordan shared his aspiration of composing an opera at a faculty gathering last year. Upton used Poe for her inspiration and O’Riordan’s music, she says, is splendid and transforms the words.

O’Riordan, assistant professor of music and director of bands at Lafayette, is an active composer, conductor, and saxophonist and the recipient of numerous awards as both a composer and a performer. His music has been performed in seven countries and 23 states.

Lee Upton is the author of 13 books including Bottle the Bottles the Bottles the Bottles (CSU Poetry Center 2015) and Swallowing the Sea: On Writing & Ambition Boredom Purity & Secrecy (Tupelo 2012). Her collection of stories, The Tao of Humiliation: Stories (BOA 2014), received starred reviews from Kirkus Reviews and Library Journal as well as highly favorable reviews from The New York Times, Publishers Weekly,and Booklist. Kirkus also selected the collection for their listing of “The Best Books of 2014.” 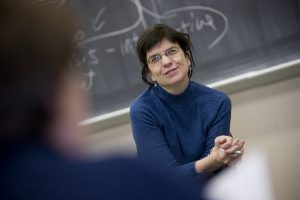 All performers, singers and musicians in the opera are students at the University of Delaware. Kaitlyn Tierny plays the Hostess, Shoshana Lieberman the woman (Annabel Lee), Christopher Jentzsch plays the man (Poe), and Travis Lucas the Red Death.  The Masque of Edgar Allan Poe was performed as well on Nov. 11 at the University of Delaware, Newark.