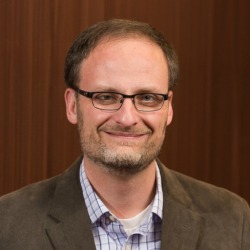 Prof. Derek R. Peterson, professor of history and professor of African studies, University of Michigan, will present the 2017 Earl A. Pope Guest Lecture in World Christianity, “Nonconformist Christianity in Africa’s Cultural History,” at 7:30 p.m. Wed., March 22, in Kirby Hall of Civil Rights, room 104, at Lafayette College. The talk is free and open to the public.

His scholarly work concerns the intellectual and cultural history of eastern Africa.

African theologians often argue that contemporary African Christianity is an outgrowth of older religious traditions. Peterson will argue that there was much that was strange, eccentric, and inconsistent about Christianity in colonial Africa. The lecture will focus on the reading habits and interpretive strategies that over time led some of Africa’s noncomformists to position themselves in narrative structures to authenticate and to legitimate dissent religious activity.

Peterson’s most recent works include Ethnic Patriotism and the East African Revival (2012), a study of a Christian conversion movement that provoked eastern Africa’s patriotic community-builders. It won the Melville Herskovits Award of the African Studies Association and the Martin Klein Prize of the American Historical Association. In 2016 he was awarded a Guggenheim Fellowship in African Studies and elected Fellow of the British Academy. Read more.

The inaugural Earl Pope Lecture was delivered at Lafayette in 2013 by one of the world’s foremost experts on the growth and spread of Christianity in the 20th and 21st centuries—Lamin Sanneh, D. Willis James Professor of Missions and World Christianity and professor of history, Yale University Divinity School.